The Harajuku Lovers Tour was the first solo concert tour of American recording artist Gwen Stefani. The tour ran from October 16 to December 21 of 2005 in support of her 2004 debut solo studio album “Love. Angel. Music. Baby.”. When tickets for the December 1 show at the Oakland Arena went on sale my youngest daughter, Willow, and I were first in line at the Santa Cruz Civic. We asked the nice woman at the ticket window for 4 tickets to Gwen Stefani, she punched in our order, and we got Row 1 Seats 1-4 !!!

Here is a compilation video I made of pictures we took and stuff we got at the Gwen Stefani Harajuku Lovers Tour in Oakland on December 1, 2005. Please forgive some of the blurry photos – I was dancing, they were dancing, and I was using a Treo 650, state of the art mobile phone camera at the time but pretty lousy by today’s standards.

When we bought our tickets the opening act was scheduled to be The Black Eyed Peas touring in support of their latest album, Monkey Business. However, it was later announced that M.I.A. would replace The Black Eyed Peas for some of the dates including the December 1 show. I was a bit disappointed since I was a big fan of BEP and had not heard of M.I.A. 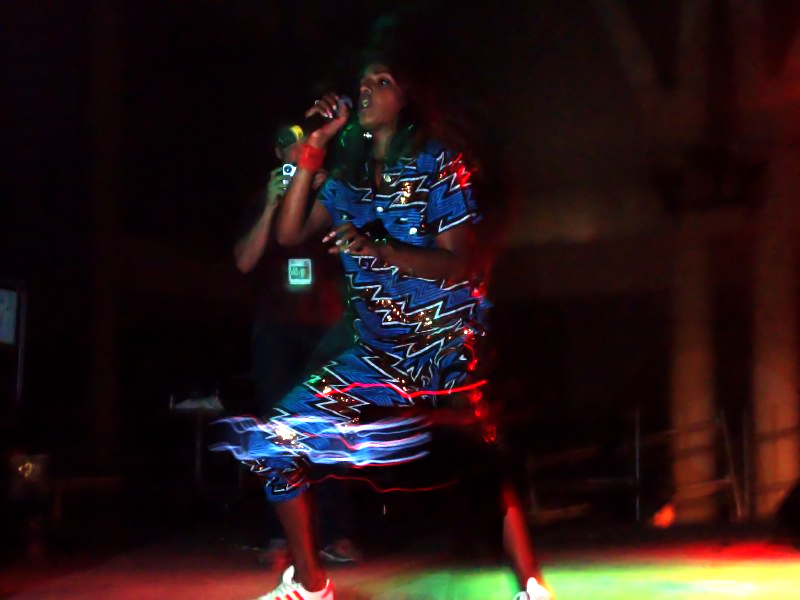 But, no worries, M.I.A. turned out to be incredibly entertaining, topical, passionate, energetic, and fun. M.I.A. was just Mathangi Arulpragasam on the Roland MC-505 music sequencer and drum machine along with a guy scratching 3 turntables. Still, I would have loved to have seen The Black Eyed Peas. However, Willow and her friend and her friend’s mom and me really got treated to a great show when Gwen Stefani came on. We were so close we could almost reach out and touch her. Gwen was looking at us and smiling as we were dancing and smiling back. It was pretty special.

Gwen opened the show with the song “Harajuku Girls“, an ode to Harajuku, the fashion district of Tokyo, Japan. She appeared on stage wearing a tiara and baby doll outfit, sitting in the red velvet and gold throne from the cover of Love. Angel. Music. Baby. and surrounded by her backing dancers, also called the Harajuku Girls, while video images of Harajuku itself played on screens behind her. Her second song was the first single from the album, “What You Waiting For?“, which she began as a ballad before bringing it up to its usual pace. Stefani and the Harajuku Girls then left the stage to change into one-piece bathing suits while her band continued to play, before returning to perform “The Real Thing“. A group of four breakdancers came on stage to perform while Stefani left the stage again to change into a black-and-white leather tracksuit. For the next song, the album’s sixth single “Crash“, the audience were then divided into male and female halves and, as images of a car hood bouncing to the beat were broadcast, each half took turns to sing the lyric “back it up, back it up”. Stefani then performed the fourth single from the album, “Luxurious“.[

Stefani changed outfits again into a pair of black hot pants to perform “Rich Girl“, the album’s second single, while walking along a catwalk into the crowd and giving fans high-fives. She then sang “Danger Zone” and “Long Way to Go“, both intimate songs, before performing two new songs back-to-back: “Wind It Up“, which would become the first single from her second album The Sweet Escape, and “Orange County Girl”. “Wind It Up” was performed with a carnival vibe and “Orange County Girl” was accompanied by a video montage of childhood photos of Stefani and images of items mentioned in the song. She changed into a silver sequined cocktail dress for the fourth single from her first album, “Cool“.[

Stefani’s next two songs were “Serious” and “Bubble Pop Electric”, for which Stefani was brought out in a stretcher by the Harajuku Girls. The encore was “Hollaback Girl“, the album’s third and best-selling single, performed in a drumming costume and singing with the audience.

This was an extravagantly produced “show-biz” show with excellent musicianship, showmanship, and stage production. The choreography was amazing. Thanks Gwen! That was quite a show. The music for Love. Angel. Music. Baby. is a significant departure from Stefani’s earlier work with No Doubt so some fans may have been disappointed. The album incorporates a diverse range of genres, including electropop, dance-rock, new wave, R&B, hip hop, soul, and disco, while lyrically, most of its songs are about fashion and wealth. Stefani co-wrote every song on the album, collaborating with various songwriters and producers including André 3000, Dallas Austin, Dr. Dre, the Neptunes and Linda Perry. I’m a big fan of No Doubt but that didn’t stop me loving this album and loving this performance. The album would go on to receive a total of six Grammy Award nominations, including Album of the Year.

Thanks Gwen Stefani, M.I.A., Harajuku Girls, musicians, producers, dancers, and everybody involved including the nice ticket person who somehow got us Row 1 Seats 1-4 !! This was a truly great show and one that deserves to be remembered.