While perusing one of my mother’s old photo albums I found a letter I had written her and my dad shortly after the birth of my first child. It’s not dated but it would have been sent sometime in late July or early August of 1978. Here it is, verbatim and unedited.

Congratulations on your first Grand Son. He (& We) are doing well (better than ever), living peacefully in the mountains of Southern Oregon. We are presently laying in the grass in the sun at the base of an old dead tree in the midst of a meadow, a mountain towering over us to the NorthEast. The grass is incredibly high, the meadow bountiful with seed, the mountain still partially covered with snow, & the old dead tree (our tipi totem) inhabited by bird families (owls & falcons) and covered by soft green moss. Next to that stands an old dead tree with a cross growing out of it – Like this – [ed: here I drew a sketch of the dead tree]. Everything here is beautiful, very peaceful, lots of wild animals, grasses, tall trees, water, clear sky, & dead wood for fuel.

Baby birthing was lots of fun & amazement for me & lots of work for Melody. The night of the Cancer Full Moon (July 19) , she went into Labor (after having walked several miles that day checking water sources with County Health officials) and continued to have contractions all night. That night there were only 5 or 6 people in camp and very quiet & although it was a short Summer night, it seemed forever. Just after dawn, Melody started uncontrollably pushing and in minutes the baby was born, dripping into a patch of sunlight streaming in our tipi door. I caught him as he came out & seeing his body still enclosed in the sac, tore it open, allowing Sun to take his first breath – a good hearty yell. I gave him to Melody – he started nursing almost right away, and began cleaning up (what a mess). After a while (1/2 – 1 hr), Melody squatted and pushed the placenta out (huge!) and we let him nurse & rest a while before we cut the cord (tied with umbilical tape). Being born in the veil, all his passages were clear (eyes ears nose throat) and he was clean.

First visitors were Govt. Anthropologists wanting to know what is the spiritual basis of the Rainbow Tribe. Baby is very peaceful, hardly ever cries; very awake-aware, likes colors. very strong, can hold his head up, grab fingers & neat feet. Very good Son & nice to sleep with. Melody takes real good care of him & i try to take good care of her (wash dishes & diapers alot). We’ll be keeping in touch, staying here probably rest of summer, then head south (try to visit you in early fall – or you can come see us this summer if you get up this way). Looks like baby falcons are ready to fly, 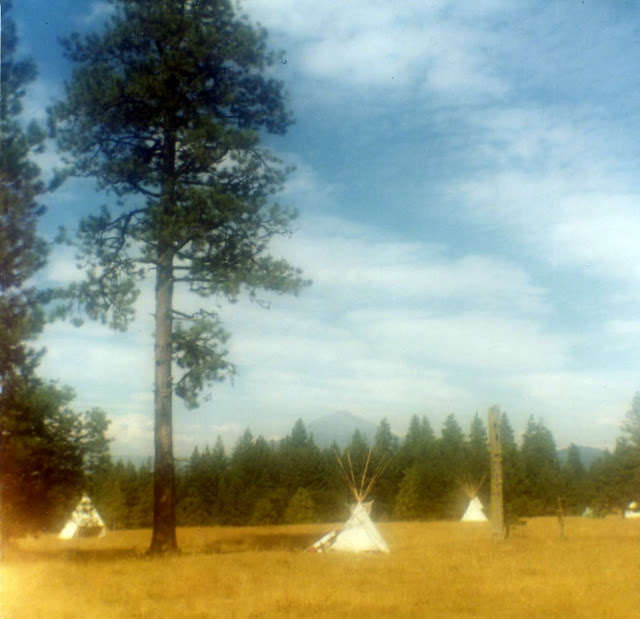 Our tipi is the one in the middle, to the foreground. The tree to the left is where the owls and falcons lived. You can see the dead tree to the right and Mount McLoughlin rising out of the trees in the background. What I didn’t include in the letter was that the umbilical cord was wrapped around Chris’s neck and his face was all blue. I managed to pull the umbilical cord off and turned to find Melody hemorrhaging horribly. I had prepared a salve of slippery elm, golden seal, and myrrh and that seemed to stop the bleeding fine. So, other than that, everything went perfectly smoothly!

You may also enjoy the following stories by Doctorwhen

Love Family Passover, 1977 In the Summer of 1976 the annual Rainbow Gathering was held in Montana by Cave Mountain, ...
Read More

How I Kissed Grace Slick

Visiting Enid with my girlfriend Swarloka in the Summer of 1975 we saw that Jefferson Starship was playing in Tulsa ...
Read More

The Wizard of Golden

In the late 1970's i participated in the Rainbow Family Tribal Gatherings. After the 1978 gathering in Oregon a few ...
Read More

The following was transcribed from a tape of an interview I conducted with Dr. Timothy Leary upon his arrival in ...
Read More

Medicine Story walked on The Path That Stands on Two Legs. His Uncle, the Sun, was coming up over the ...
Read More

The Hippie T.A. and The Nuclear Mathematician

In 1974 I was a graduate student in mathematics at the University of Florida in Gainesville, Florida. I was working ...
Read More

How to Build a Chickee and Talk to Cockroaches

Characters in and around the swamps and rivers of north central Florida were as plentiful as paw-paws in a paw-paw ...
Read More

The Greatest Poetry Reading of All Time

The War of the Whales

A short scientific parable by Renaldo Recuerdo The story has been sung to us from the centuries. My mother's mother's ...
Read More